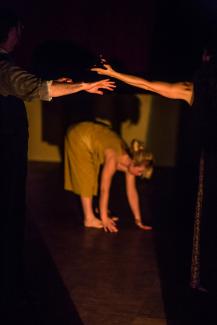 Adapt/Oppose is a modular graphic score system for structured improvisation by the Berlin-based experimental music composer-percussionist Burkhard Beins. Since its creation in 2007, individual versions of Adapt/Oppose have been performed by professional musicians, namely by Beins' own ensembles Polwechsel and Glück. It has also been used as the basis for numerous workshops for beginners or semi-professionals. Nevertheless, up to this point Adapt/Oppose has been only used in pure musical contexts. Adapt/Oppose is based on a handful of basic signs - circles, horizontal lines, curved and dashed diagonal lines - and defines musical spaces for group interaction. Due to their specific nature, the signs can be combined in multiple ways in order to create complex structures. In this landscape the performers are asked to move within the given structures. The system works by isolating two concurrent sets of binary oppositions: one set indicates the cueing in or out performers and the other set indicates the function of the performers chosen material - by either adapting or opposing a given situation.

Inspired by this System and by the possibility to create music through the body and dance through the actions of musician in space, Jadi Carboni proposed Beins to try its notation with some dancers.

Since then they have been developing a dramaturgy, where the 4 notation pages they chose are alternated with some electronic interludes, composed by Beins. 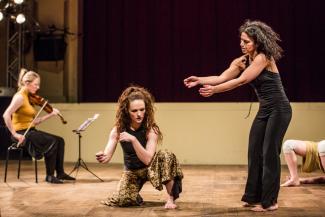 "Burkhard Beins is best known as one of the most distinctive percussionists in European free music." The Wire

"A polymath who has moved among noise, notated and electronic sounds plus semi-acoustic improvising Beins expresses atonality in a unique fashion on each disc" Jazzword

" ...simply one of the most imaginative percussionists around, indeed making the tag 'percussionist' seem hopelessly deficient." All Music Guide